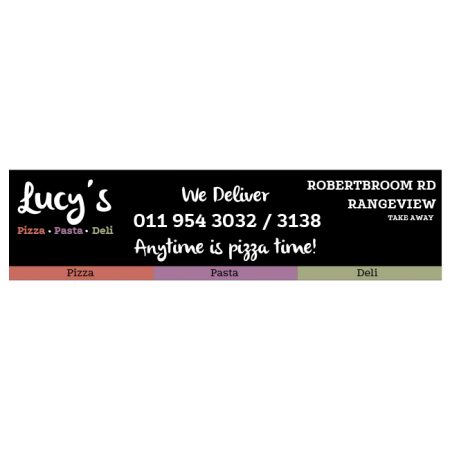 Lucy’s became our client back towards the end of 2014. We were commissioned to design and develop their website for them.

The whole website, posters and any design material were all fashioned around their menu. They had, had a previous advertising/design company that they were using. However they were complaining that they were too expensive and too slow. So Living Graphix stepped in to assist. We did subsequently lose Lucy’s back to them. Only because we moved away, physically, as in our premises moved. The other agency stepped in and took over. We did do a great deal of work for them in that interim. When we took over their work. Lucy hired a professional photographer to take all the pictures of Lucy’s food. We used most of those images in our designs. Along with the existing fonts. The design was a bit complicated, because, the images needed to be deep etched and some of them touched up.

Backgrounds removed and having to overlay some things. This is not easy work and we cannot really charge full price for it. As that would just completely make it unaffordable for our Client. So a great deal of the work was done at a very reduced rate. All the artwork was done using Adobe Photoshop and Adobe Illustrator. You will see through the range how the designs change, yet, stay similar. We were really following our clients brief and designing and trying to give them what they wanted. While trying to really make the special, the food and the actual information and prices stand out. We were allowed to experiment here and there, but were limited to the brand and existing fonts. Posters were generally done 4 or more at a time and literally took hours, sometime a couple of days to accomplish.